“A very dedicated leader. He has superb attention to detail and never loses sight of the clients' needs”. - The Legal 500 2022
"An excellent leader with a cool head." - The Legal 500 2021
"He has good insight and really understands human behaviour." - Chambers and Partners UK Bar 2021

He values and encourages teamwork by fully engaging with his clients, solicitors and juniors to achieve results.

He welcomes instructions from long-standing and new professional clients, including privately funded cases, and works alongside junior counsel from Dere Street, other chambers and in-house Higher Court Advocates.

R v Metwally [2021] (Sheffield – His Honour Judge Richardson QC, The Recorder of Sheffield) Prosecuting Dr Hossam Metwally, a Lincolnshire based anaesthetist who used potentially lethal clinical drugs to sedate his partner in order to perform exorcism rituals upon her and thereby endangered her life. He was charged and, after an 8-week trial, convicted of offences related to the repeated administration of poisons, the supply of controlled drugs and medicines, and also fraud. Dr Metwally was sentenced to 14½ years’ imprisonment. Leading Geraldine Kelly of New Park Court Chambers and instructed by CPS CCU, Leeds. Media coverage can be found here

R v Rutherford [2021] (Newcastle – Her Honour Judge Moreland) Defending a man charged with the murder of the father of his former partner. The outcome of the case turned on the evidence of a forensic scientist and a consultant neuropathologist. Mr R was acquitted of murder but convicted of manslaughter. Instructed by and leading Paul Dunn of Lawson and Thompson, Blyth.

R v Saffari [2021] (Teesside – Mr Justice Wall) Defending Noza Saffari accused of the murder of a significant criminal figure who was also a member of the Kurdish Peshmerga. It was alleged that the victim lured to a vacant terraced house in Hartlepool where he was shot at point blank range before the offenders made off in a vehicle which was subsequently burnt out close to the A19. The prosecution alleged this was a planned execution orchestrated by an Albanian gang. After a trial lasting three months Mr S was acquitted of murder but convicted of manslaughter (lack of intent). Leading Rod Hunt of Dere Street Barristers and instructed by AHM, Middlesbrough. Media coverage can be found here.

R v Sanderson [2020] (Newcastle – Mr Justice Goss) Defending a man who was held unfit to plead and subsequently found to have unlawfully caused the death of his mother. Leading Geoffrey Knowles of Cathedral Chambers and instructed by Lawson and Thompson, Blyth.

R v Milroy [2020] (Newcastle – His Honour Judge Jameson QC) Defending Steven Milroy who was jointly charged with the murder of a man who suffered a sustained and brutal attack inside and outside Mr M’s home following a dispute over stolen drugs. After a ‘cut throat-defence’ the co-accused was convicted of murder and Mr M was convicted of manslaughter (lack of intent). Leading Liam O’Brien of Dere Street Barristers and instructed by Hodgson Coulthard, Houghton le Spring.  Media coverage can be found here.

R v Vaughan & Johnson [2020] (Teesside – His Honour Judge Ashurst) Prosecuting two young defendants who were convicted of the murder (V) / manslaughter (J) of an older man who was, apparently, attacked for buying drugs with a counterfeit £20 note. Instructed by CPS Middlesbrough, leading their Rachel Masters.  Media coverage can be found here.

R v X [2020] (Teesside – His Honour Judge Watson QC, The Recorder of Middlesbrough) Defending a boy who pleaded guilty to gross negligence manslaughter after causing the death of his 7-year-old sister in a house fire. Leading Stephen Constantine of Dere Street Barristers and instructed by Hewitts Solicitors, Darlington.

R v NHC [2020] (Leeds – His Honour Judge Bayliss QC) Prosecuting a partnership business that pleaded guilty to Corporate Manslaughter and was fined £160,000 after their workman suffered a fatal fall from the flat roof extension to a terraced house. The business accepted the prosecution case that their failure to take reasonable care for their employee was gross, including failures to comply with Regulations and HSE Guidance relating to work at height. Instructed by CPS Special Crime and Counter Terrorism Division and the Health and Safety Executive. Media coverage can be found here

R v Odessa Carey [2020] (Newcastle – His Honour Judge Sloan QC, The Recorder of Newcastle) Defending Ms Carey who psychiatrists determined unfit to plead. A jury subsequently found that she had killed her mother, who was decapitated. Leading Penny Hall of Dere Street Barristers and instructed by Alderson Law, Blyth. Media coverage can be found here

R v J [2020] (Teesside – Mr Justice Jacobs) Defending a businessman charged with murder who was alleged to have participated in a joint enterprise to exact retribution on a man suspected of burglary. After a trial lasting seven weeks Mr J was acquitted of all charges; other defendants were convicted of murder and/or manslaughter. The case involved expert interpretation of iOS location and health app data. Leading Stephen Constantine of Dere Street Barristers and instructed by TBI, Hartlepool. Media coverage can be found here

R v Timney [2019] (Teesside – His Honour Judge Bourne-Arton QC, The Recorder of Middlesbrough) Defending Andrew Timney who was alleged to have killed his neighbour. The case involved complex medical evidence on cause of death – pathology, neuropathology, neurology, cardiology and toxicology: the defendant was acquitted of murder and convicted of manslaughter. Instructed by VCW Law, Stockton on Tees to lead their HCA Nicole Horton.

R v Wass [2019] (Newcastle – Mr Justice Jacobs) Defending Mrs Wass who was alleged to be a party to the murder of a young mother in Hartlepool in broad daylight by her estranged partner, Torbjorn Kettlewell. She was acquitted of murder and convicted of manslaughter as a secondary party. Leading Stephen Constantine of Dere Street Barristers and instructed by TBI, Hartlepool.

R v J [2019] (Newcastle – Mr Justice Butcher) Defending Mr J who admitted killing his boss by strangulation but said he did so in lawful self-defence. He pleaded guilty to theft and was acquitted by the jury of murder, manslaughter and assault with intent to rob. Leading David Comb of Trinity Chambers and instructed by Alderson Law, Blyth.

R v Atay [2019] (Newcastle – His Honour Judge Sloan QC, The Recorder of Newcastle) Prosecuting Mrs Atay who stabbed and killed her husband in their family home. She subsequently claimed to have acted in self-defence. Psychiatric and psychological evidence was called in support of alternative partial defences of loss of control and diminished responsibility based on alleged coercive control of her by the deceased. Mrs Atay was convicted of manslaughter only by reason of lack of specific intent to kill. The sentencing judge rejected her account of coercive control. Leading Laurie Scott of Dere Street Barristers and instructed by CPS Northumbria.  Media coverage can be found here.

The Court of Appeal rejected the defendant’s appeal against her sentence of 14 years’ imprisonment – see [2020] EWCA Crim 274.

R v Williams [2018] (Leeds – Mr Justice Spencer) Prosecuting the manufacturer of a cot-bed for HSE offences which led to the death of a baby. Instructed by CPS Special Crime Division, York.

R v Black and others [2018] (Liverpool – His Honour Judge Warnock) Defending R, a financial consultant in a trial prosecuted by the Serious Fraud Office that lasted 5 months. The case concerned millions of pounds worth of sales of solar panels throughout the UK using incentive schemes based on prospective offshore investment and insurance that did not materialise. Leading Mark Styles of Dere Street Barristers and instructed by Wragg Mark-Bell, Carlisle. Media coverage can be found here.

R v Rafael and others [2018] (Teesside – His Honour Judge Armstrong) Prosecuting members of a family who were tried over 4 months and convicted of running a modern slavery business – tricking vulnerable people from the Slovakia into the UK to exploit them for financial gain. Leading Matthew Donkin and Richard Holland, both of New Park Court Chambers, and instructed by CPS CCU Northumbria. Media Coverage can be found  here.

R v Azram and others [2015-17] (Newcastle – Her Honour Judge Moreland) Prosecuting 24 defendants in a series of trials arising from Operation Shelter, the principal part of Operation Sanctuary which was the first wider police investigation into the sexual exploitation of girls and young women in Tyne & Wear. Leading Dan Cordey of Dere Street Barristers and Nick Lane of New Park Court Chambers; instructed by CPS CCU Northumbria. Media coverage can be found here and here.

R v F & D [2016] (Teesside/Leeds – Mr Justice Globe) Defending D who was convicted with another girl of the notorious murder of Angela Wrightson when D was 13 years’ old. The case also raised important collateral issues: the use of intermediaries, restrictions on reporting of proceedings on social media [2016] 2 Cr App R 13 and the anonymity of the young defendants (extended permanently in 2021). The sentencing remarks can be found here . Leading Jim Withyman of Dere Street Barristers and instructed by TBI, Hartlepool.

R v Ruddy [2015] (Newcastle – His Honour Judge Sloan QC, The Recorder of Newcastle) Prosecuting Martin Ruddy who was convicted of murdering his mother and father in their home. At trial Ruddy unsuccessfully claimed that he and they had been attacked by unknown intruders. He was sentenced to imprisonment for life and ordered to serve a minimum term of 35 years. Leading Jolyon Perks of CPS Newcastle.

R v Miller [2013] (Leeds – Mr Justice Coulson) Defending John Miller who killed his partner and daughter. His guilty pleas to manslaughter by diminished responsibility were accepted by the prosecution. Leading and instructed by Richard Reed of Graham Stowe Bateson, Leeds. Media coverage can be found here.

R v Haigh [2012] (Truro – Mr Justice MacKay) Defending Yorkshireman Thomas Haigh who was convicted of shooting two alleged drug dealers from Liverpool and Plymouth at a Cornish farm before they were buried inside their car by co-accused Ross Stone using a JCB excavator. Leading and instructed by Carl Kingsley of Kingsley Brookes, Huddersfield.

R v R [2010] (Woolwich – Mr Justice Cooke) Defending Mr R who was accused with two others of conspiring to tamper with a jury during a Newcastle gangland murder trial at Leeds in 2002. The prosecution relied on informant evidence called pursuant to a section 73 agreement. The proceedings were stayed for abuse of process shortly before the prosecution closed its case on account of failings in the disclosure process. Leading Robert Adams of Trinity Chambers and instructed by Haswell & Cornberg, Newcastle.

“A very dedicated leader. He has superb attention to detail and never loses sight of the clients’ needs”.

“He has good insight and really understands human behaviour.”

“An excellent leader with a cool head.”

“He is very insightful and he has a keen eye for detail. He gets straight to the point and is a very tenacious advocate.”

“He is very experienced and very calm.”

“He has excellent advocacy and client care skills. The matter was complex and despite having the case sent to him late, he mastered the vast amount of evidence with ease and speed.”

“Experienced in a range of heavyweight cases.”

“He is, for many, the first-choice silk on the North Eastern Circuit” 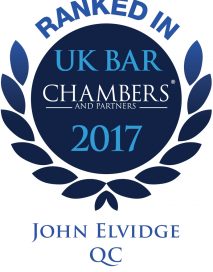