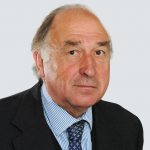 Recently, after over 50 years practising at the Bar Robin Denny defended his last trial in the Crown Court and gained his usual result – a not guilty verdict.

Born in the last year of the Second World War, apparently to the soundtrack of Wellington bombers, Robin was called to the Bar in 1969. He was a member of 11 Kings Bench Walk until he left with others, led by Peter Fox QC, to form a chambers at 1 Plowden Buildings. Subsequently he moved to 2 Harcourt Buildings / 17 Blake Street, York from which he departed in 1988 for a tour of sets on the North Eastern Circuit including Fountain Chambers in Middlesbrough and New Court Chambers in Newcastle. He returned to York in 2005 explaining he was motivated by loyalty. He has been a member of Dere Street Barristers since it was formed in 2011.

A man of letters not computers who preferred evidence to procedure, Robin was a formidable court advocate who entertained generations of jurors, solicitors and clients. His skill and wit thwarted many an opponent and achieved an astonishing rate of acquittals.

All members of chambers and staff wish him a long and happy retirement.