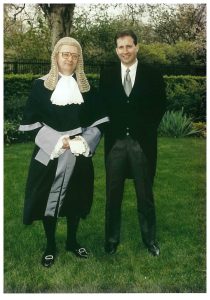 Chambers was saddened to learn of the death of Simon Hawkesworth yesterday evening.

Simon was called to the Bar in 1967 and completed his pupillage with Rudolph Castle Miller at 2 Harcourt Buildings where he remained until York Chambers was formed in 1990. He had a stellar practice on this Circuit and beyond both as a junior and in Silk, which he achieved in 1982 at only 15 years’ call. In 1990 he was elected as a Bencher of Gray’s Inn.

Simon was an elegant and highly accomplished advocate who worked across the disciplines and appeared regularly in the Court of Appeal. His work in the House of Lords included Jobling v Associated Dairies, Ferguson v Welsh, AG’s Ref (No 3 of 1994) and Longden v British Coal. In 1987 he was leading counsel for the parents in the Cleveland Child Abuse Inquiry which had enduring implications for child protection and was influential in the reforms that lead to the Children Act 1989.

He chose the Circuit Bench over the High Court when he was appointed in 1999 after serving as Head of Chambers for 9 years. He became the Designated Civil Judge at Bradford.

Simon was a performer at heart and for many years trod the boards with the Kirkby Overblow Dramatic Society. He was a regular at Opera North and Headingly, and master of cocktails on the annual Bar ski trip to Zermatt. Until very recently he was an active member of Harrogate Choral Society and Ripon Tennis Centre.

His warmth and wit will be sorely missed by his many friends.

We send our condolences to his wife May and their boys.