Ravinder has been a specialist family practitioner throughout her career. She is deputy head of the family team

Her work spans complex ancillary relief, public law and she has reached a high level of specialism  in her niche practice in international cases, including child abduction, overseas adoption and divorce. Ravinder is often the first port of call in cases with an international element, where she provides speedy and pragmatic advice.

Ravi deals with all aspects of high conflict private law and public law, including forced marriage, factitious illness, sexual abuse, serious non accidental injury with complex medical evidence. She is regularly instructed in complex matters by the local authority, parents and guardians. She is recognised for her forceful advocacy and strong tactical skills. She is a calm presence in court and leaves no stone unturned in her meticulous preparation. Ravi establishes a quick rapport with her clients and takes full advantage of technology in using video and Skype conferences where this will assist the client.

She has experience of dealing with vulnerable adults in Court of Protection cases as well as representing the local authority in this arena.

Ravi has advised local authorities and police authorities regarding policies in forced marriage cases.  She was invited to draft the authority policy in FGM cases so that s standardised approach is adopted and that there is a local protocol for regular police liaison. 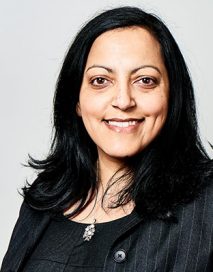