Rachael is an experienced criminal practitioner, defending and prosecuting across the spectrum of criminal offences. Rachael’s most frequent instructions are to prosecute and defend in allegations of sexual offending, including historic cases, and those involving serious violence. She has a wealth of experience in dealing with vulnerable witnesses, principally children, and has a reputation for doing so sensitively and effectively. Rachael has a keen eye for detail, producing successful written arguments involving points of law and procedure. Rachael meticulously cross-examines witnesses, making careful use of disclosed material to support the case she presents.

Alongside Rachael’s criminal practice is her family practice, in which she regularly appears in private and public matters. Rachael has extensive experience of appearing for Local Authorities, parents, and Guardians alike. This aspect of Rachael’s practice is complemented by her criminal experience. She appears in serious matters involving sexual abuse and non-accidental injury, where the strong working knowledge of both disciplines allows her to leave no stone unturned.

In both disciplines, Rachael takes an assertive approach on behalf of her clients, robustly representing their interests throughout. She builds a good rapport with her clients, providing advice to them in a way which is clear and uncomplicated.

Rachael’s written and preparatory work is widely appreciated by those instructing her, for its clear analysis and helpful guidance. Rachael has received praise from the judiciary for her persuasive and well-argued skeleton arguments.

Rachael is provides pre-charge advice in criminal cases, including those with complex issues.

Regina v GH, Inner London Crown Court – two week defence trial, during which Rachael successfully defended a client accused of numerous sexual offences against a family member. He was acquitted of all offences before the jury.

Regina v JM, Carlisle Crown Court – two week defence trial, during which Rachael successfully argued to exclude scientific evidence adduced by the prosecution. Following cross-examination of the complainant, the counts of rape were removed from the jury, with counts of attempted rape substituted.

Regina v BW, Court of Appeal (Criminal Division) – successful appeal against sentence, where the sentencing judge placed the appellant into category 1 of the rape sentencing guidelines. The Court of Appeal agreed with Rachael’s written and oral arguments, allowing the appeal and replacing the sentence with one in the lower category.

Regina v SG, Durham Crown Court: Successfully opposed the making of a Restraining Order alongside a SOPO. Following receipt of Rachael’s skeleton argument, the sentencing judge conceded – inviting the prosecution to do the same – that there could be no argument against the defence representations. The sentencing judge commented that Rachael’s skeleton argument was a model of how such documents should be drafted.

Regina v CW, Teesside Crown Court: Defended a young male in a multi-handed violent disorder trial. The case involved issues of Facebook identification, subsequent identification procedures, and bad character. Successfully opposed the admission of the defendant’s bad character and methodically cross-examined witnesses, highlighting the unreliability of the Facebook identification and credibility of those witnesses. The defendant was acquitted following a two-week trial.

Regina v DD, Durham Crown Court: Represented the defendant, who was alleged to have assaulted his nephews, aged 9 years and 10 years at the time of trial. Secured the acquittal of the defendant following careful cross-examination of the children, the result of which led to a successful submission of no case to answer.

R v SS, Teesside Crown Court: Appeared on behalf of the 14 year old appellant charged with theft. The appeal was allowed and the appellant acquitted following a successful Section 78 Police and Criminal Evidence Act 1984 argument relating to the purported recognition of the appellant by a Police Officer.

Re: D (a child): Represented the father in proceedings brought in relation to a newborn baby. Contested the applications for Care and Placement Orders at final hearing. Following 5 days of contested evidence, the Local Authority withdrew its application for a Placement Order and changed its plan to rehabilitation to the parents’ care.

Re: OB (children): Rachael represented the Local Authority in a fact finding hearing in respect of serious sexual abuse of one of the children, perpetrated by the father. The case involved a number of complex issues, including applications for the child to give evidence, learning disabilities, and a concurrent police investigation. Following contested evidence, the trial judge made the findings as sought by the Local Authority.

Re: A (a child): Acted for grandparents, from whom the child had been removed following suspected non-accidental injuries. The Local Authority sought to place the child and unborn baby for adoption. Secured the return of the child and a recommendation that the Local Authority prepare a report for the placement of the unborn baby with maternal grandparents. The case resulted in the granting of a Special Guardianship Order in favour of the maternal grandparents for both children.

CPD lectures provided in both criminal and family practice areas. 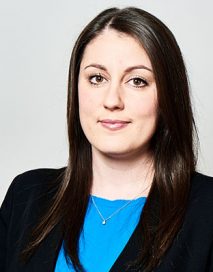