James has been head of the personal injury team at Dere Street Barristers in York and Newcastle, since 2017.

He has presented cases at all levels up to the Court of Appeal during continuous practice at the Bar since 1992.  This experience includes such varied matters as Multi-track trials involving catastrophic life changing injuries, head injuries, and the complications of what start off as one thing and become much more serious such as total loss of speech after damage to teeth and chronic pain arising from complex regional pain syndrome and conversion disorders and fibromyalgia.

He has over 20 years’ experience of industrial disease work especially deafness/ HAVS claims and has a particular interest in asbestos related cancer and mesothelioma claims.

Clinical Negligence cases have become more important as his career has progressed and this has brought additional experience of dealing with physical injuries occurring in conjunction with post-traumatic stress and depression.

He gets on well with clients and is very approachable.

James is used to working with and getting the best from medical and other experts who are often located in different cities across the country to ensure they are used to best effect and are the right person to present the evidence to the other side and the Judge.

He good at dealing with the practical and legal issues surrounding head injuries, life changing events such as depression, chronic pain, amputation and fatal accident cases requiring a sensitive and intelligent approach to litigation.  The use of pain Management Consultants and innovative consideration of up to date therapies, aids and equipment and prosthetics using the latest and most up to date Occupational Therapists is a separate skill developed over 20 years of experience.

James has represented his clients at Joint Settlement Meetings (JSM) and in formal mediation achieving good outcomes by applying practical sense and using his experience of courts.

Notable Cases: the following cases give examples of James’ wide range of experience; 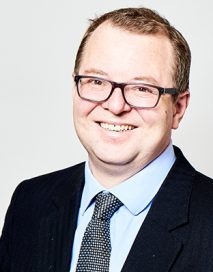