James joined Chambers in September 2019 after successful completion of pupillage  under the tutelage of Stephen Ainsley  (Family Law) and Anthony Davis. (Criminal Law)

James is a dual practitioner and splits his time equally between Criminal Law and Family Law.

James is a Grade 2 prosecutor and appears for both the prosecution and defence.

Prior to coming to the Bar, James worked at a leading criminal defence solicitors firm in North Yorkshire for 3 years, representing clients in police stations and managing Crown Court files. James advised on all manner of criminal offences including violence, serious sexual offences, supply of drugs and firearms offences. James has also advised clients suspected of Murder, including a 15 year-old girl. He regularly represented clients who were being prosecuted/investigated by the Trading Standards Agency, RSPCA, General Medical Council and Civil Aviation Authority.

Since coming to the Bar, James has appeared for both the prosecution and defence in numerous cases. James has also been a led junior in the following cases:

R v C and S – 3-week trial in which the client (a Polish national with limited command of English) faced allegations of importing approximately £10,000,000 worth of cocaine into the UK (the largest single seizure of cocaine in the UK in 2018).

R v F and H – 9-day trial in which the client, a young woman with a borderline learning disability, was charged with an alleged offence under s.5 of the Domestic Violence, Crime and Victims Act 2004. The case involved catastrophic injuries to a 7-week old baby, including blindness in both eyes and cerebral palsy. The case that was put against James’ client was that she ought to have been aware of the risk of such injuries being caused by the co-Defendant. The client was acquitted by the jury.

James is passionate about family law and accepts instructions in both public and private law matters. He regularly represents local authorities, individuals and children in multi-day fact-finding and final hearings.

James is meticulous in his preparation and establishes a good rapport with his clients at an early stage, providing clear, measured and realistic advice.

Below is a sample of the cases James has been instructed in:

CCC v B – Represented the Local Authority as a led junior in a 15-day final hearing in the High Court. The case involved the long-term placement of 4 teenage boys, who were in separate residential placements and 2 of whom were subject to Deprivation of Liberty Orders. Issues included inter-sibling sexual abuse, parental sexual abuse, domestic violence and complex psychological/psychiatric evidence. As a led junior, James was part of a team which considered and presented approximately 18,000 pages of evidence. The court made the orders sought by the Local Authority.

DCC v H and W – Represented the alleged perpetrator of serious head injuries to a young baby in a finding of fact hearing.

M v M – Representation of a mother in private law proceedings in a 5-day finding of fact hearing. James’ client, who had learning difficulties, made 14 allegations which included rape, various forms of violence, controlling behaviour and threats by use of weapons. The court found all 14 allegations proved and finalised the proceedings by way of a Child Arrangements Order, stipulating that the father should not have any further contact with the child.

The Honourable Society of the Middle Temple;

Graduate Diploma in Law with Commendation, University of Law (2014); 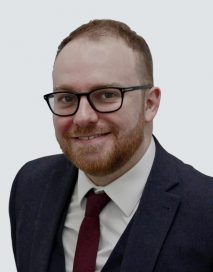