Carly is a specialist Family practitioner whose practice focuses on Public Law Children Act work.  She accepts instructions to appear in the Family Division, before the Circuit Bench and at Inquest.

Carly sits on the North Eastern Circuit as a Family Recorder in Private Law and Public Law Children Act cases and in August 2019 was appointed as a Deputy High Court Judge, sitting in the Family Division.  She also sits as an Assistant Coroner in Newcastle and North Tyneside and North and South Northumberland.

As a result of her judicial experience, Carly is uniquely placed to advise on appeal and to undertake Appellate work.  She has appeared in a number of notable Court of Appeal cases, listed below.

Carly accepts instructions to advise and represent parties in respect of Human Rights Act applications concerning children and has appeared in a number of cases in which claims for damages have been made as a consequences of abuses of s.20 Children Act 1989 by local authorities.

Carly has been involved in a number of high profile cases and has successfully applied for several Reporting Restriction Orders to protect the anonymity of children.  She was involved in the first set of care proceedings where live reporting was permitted.  The case was a rehearing of circumstances of the death of Poppi Worthington.

As a consequence of her Coronial work, Carly has significant expertise in cases involving fatal and near fatal injuries to children and adults. She has a particular interest in those cases involving complex medical evidence. She has extensive experience of examining medical witnesses and experts, including pathologists, paediatricians and radiologists.

Carly accepts instructions to appear as an advocate at inquest and advises on all aspects of coronial work.  She has particular expertise in inquests involving children and babies who have died, including cases in which Serious Case Reviews are held.

In addition, Carly is an Accredited Advocacy Trainer for the North East Circuit and is an Approved Pupil Supervisor.

Cumbria County Council v M & Ors [2016] EWFC 27 (06 May 2016) Appeared as Junior Counsel on behalf of the child in respect of an application brought by the Children’s Guardian under the Inherent Jurisdiction involving a case in which the Father had been found to have killed the child’s younger sibling. Following the fact finding hearing, it transpired that the Police had failed to disclose a piece of evidence which had the potential to require the Court to revisit its decision.  Issues of publicity also considered arising from this and the earlier judgment.

Carly appeared as Junior Counsel for the children in the case concerning the death of Poppi Worthington.  She was instructed at the outset of proceedings and appeared at all hearings with and without Leading Counsel in the Family Division and in the Court of Appeal.  This involved two substantive fact finding hearings to ascertain the causation and perpetration of Poppi Worthington’s injuries and to explore cause of death.  Carly also attended a number of interim hearings concerning publicity, Reporting Restriction Order applications, interim welfare arrangements and a final welfare hearing.  Carly was the author of a schedule of failings that was appended to the substantive judgment of Peter Jackson J following the first fact-finding hearing, which was sent to agencies nationally, including the IPCC, Ofstead and the Care Quality Commission.  Carly chaired the experts meetings in the case and attended a laboratory to produce a schedule of agreement and disagreement between the instructed expert Home Office Pathologists about the physical appearances in blocks and slides taken at post mortem.

The citations of substantive judgments from the case are listed below:

“She takes a forensic approach to cases and is highly organised and very approachable.”

“She is incredibly bright, very hard-working and gets excellent results.”

“She is extremely hard-working. Her preparation is second to none. She is just superb. She will go far because she is so dedicated.”

“Always well prepared. A courageous and accomplished advocate.” “She is top class: extremely hard-working and very forensic in her approach. I would choose Carly for a case where the issues are technically difficult.”

The Legal 500 2016
“An excellent barrister; bright, persuasive and a strategic thinker with a passion for public law children work.” 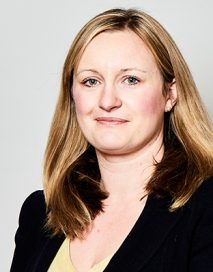 Family Recorder to sit in Private and Public Law cases on the North Eastern Circuit, appointed 2016